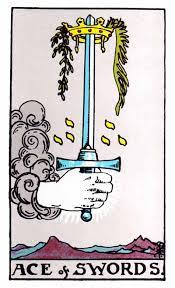 The Minor Arcana is the forerunner to the modern-day playing card deck. of 56 cards. In Tarot these are made up of four suits of 14 cards. In each suit the cards are numbered Ace to 10, plus four court cards: Page, Knight, Queen and King.

Incorporating numerology and symbology gives each card in Tarot a deeper meaning. This makes learning to read them quite easy. For example, each card has a simple image, which belongs to a suit, and has an element that represents that suit. Stories and journeys are created by each card in that suit adding to and building upon the previous cards. The descriptions of the cards are based on the Rider Waite tarot deck, while other decks may have different pictures, yet the basic meanings remain consistent.

Number One: New beginnings and action.

Aces are the first card in the suit. The number one relates to "independence, individuality, initiation," and an overall sense of new beginnings. When aces appear in a spread, it indicates what areas of the querent's life are ready for a change, big or small — and where to focus attention to take the steps to create those shifts.

The illustration of the Ace of Swords is a hand coming out of  a black cloud with a grey background, holding a sword with a crown on top. Swords represents truth, mental thoughts, actions and words. Drawing the Ace of Swords indicates a break through the fog that has clouded the querent’s ability to think clearly. This card also calls for the querent to be clear and assertive and to speak their truth when communicating with others.

The picture of the Ace of Wands is a hand coming out of the clouds holding a wand. The wand is sprouting new leaves. Wands represent drive, energy, motivation, passion, creativity. Drawing the Ace of Wands indicates that it is a good time to start a new project or do something interesting and creative. Depending on the querent's question it could mean a new possibility/ potential/ opportunity opening up. The Ace of Wands also encourages the querent to believe in themselves, trust their own instincts, find their own voice so that they can follow their own dreams.

The image of the Ace of Cups is a hand coming out of the clouds holding an overflowing cup of joy and happiness. Cups represent feelings, emotions and intuition, so now is a good time for a fresh start and/or possibly a new relationship that is emotionally fulfilling.

The suit of Pentacles represents physical manifestation - money, wealth, business and practical things. The Ace of Pentacles depicts a hand emerging from the clouds, open palm upwards holding a large coin. This card represents the universe offering a gift, a new way of making money or manifesting abundance. It could also signify a new financial or career opportunity.